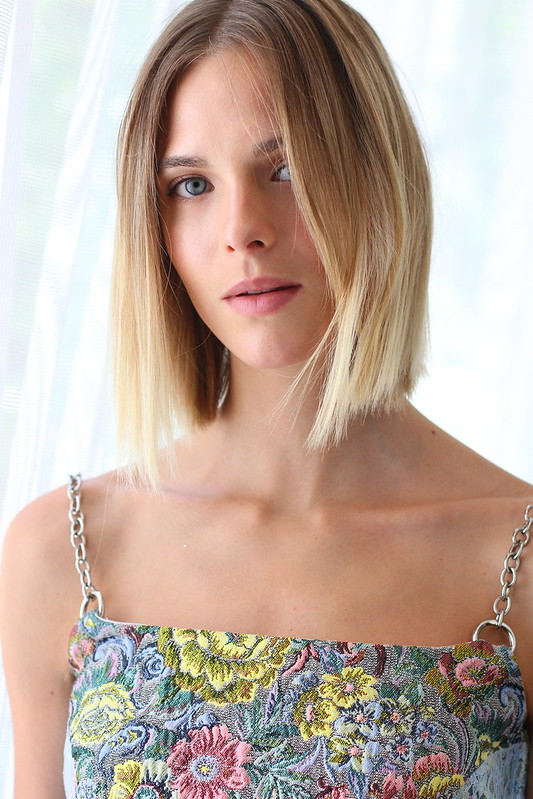 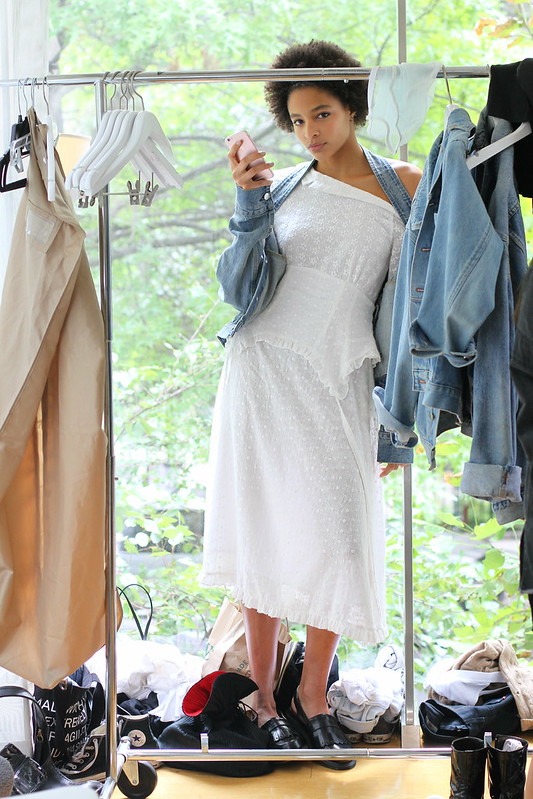 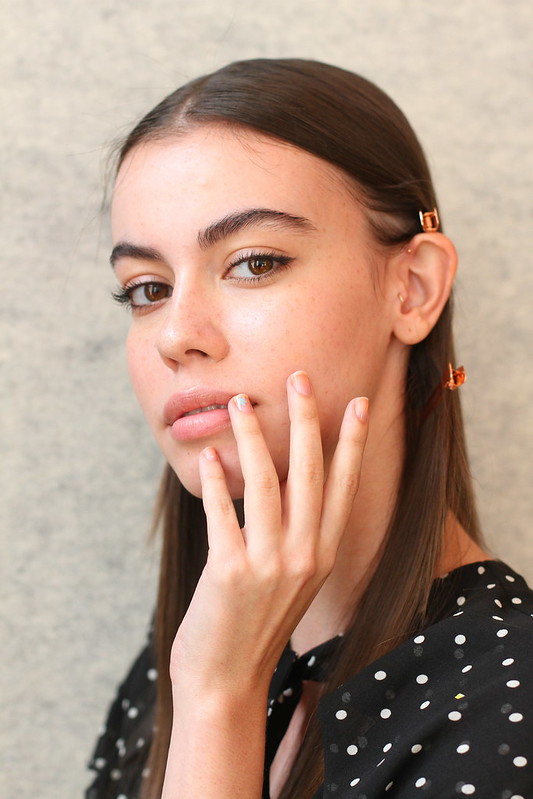 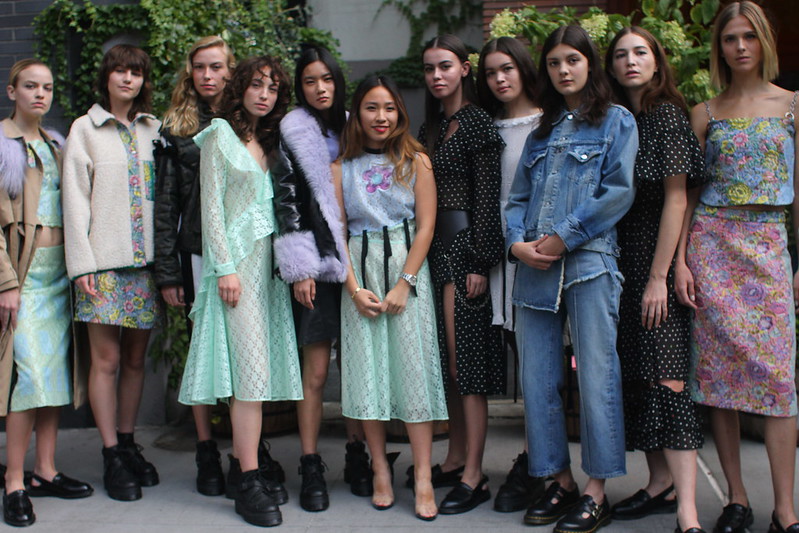 Designer Sandy Liang with her models. 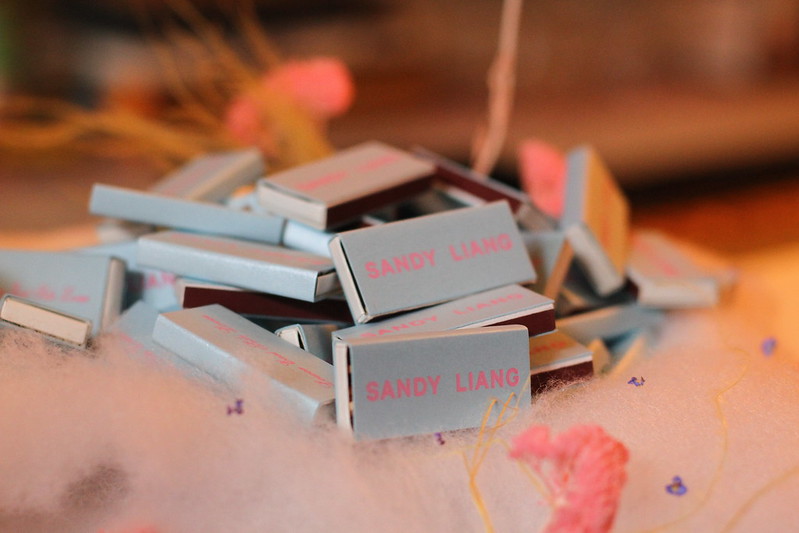 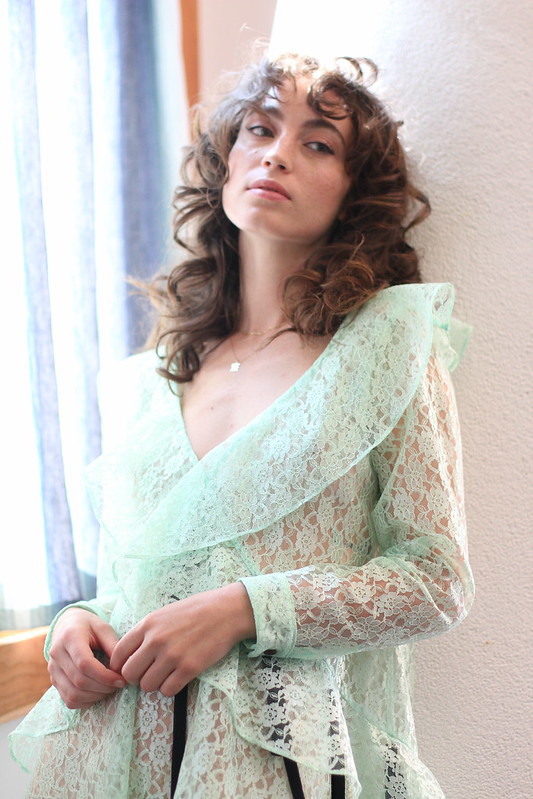 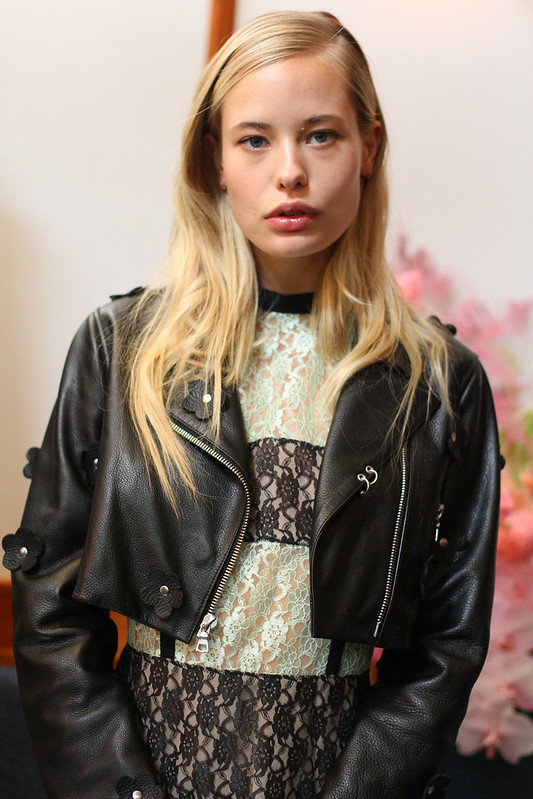 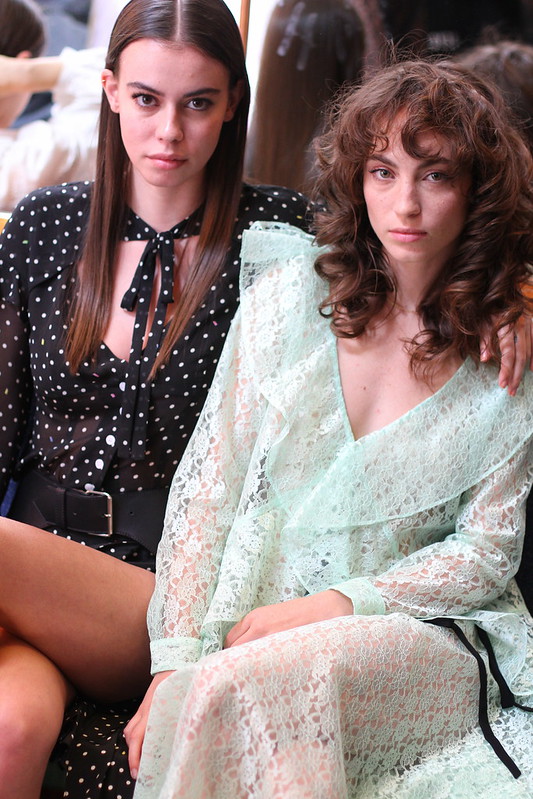 This season, l.a.m.b. moved from the largest space in the tents, to the smallest. The lack of designer Gwen Stefani, who was busy recording the new No Doubt album in LA was the likely culprit for the downgrade. But I couldn’t help but feeling a lot more than just Gwen was missing.

Thankfully, the hair and makeup was on par with past l.a.m.b shows. Famous hairstylist and Gwen BFF Danilo never fails to thrill with his amazing and eclectically influenced hair creations.

Danilo, for Pantene created the look for spring, describing it as an “Indian inspired yoga knot”.

To get the look:
Start with Pantene Beautiful Lengths Smoothing Balm, slicking the hair back into a high ponytail. Next, black ponytail extensions (using extensions from Flawless by Danilo) were fastened around the natural pony. Hair was then twisted into a messy topknot, and secured with an elastic.

An old-school l.a.m.b for lesportsac wristlet setting on the counter backstage.

Nails were by ESSIE. Using 2 coats of the upcoming Winter 2012 color “Bobbing for Bubbles”, celebrity manicurist Elle created an eye-catching look for the models nails.

ESSIE founder and president Essie Weingarten was backstage to see her creative team in action:

To get the look: Create a smooth surface with Fit Me Foundation and Pressed Powder on the face. Next, using a damp makeup brush, gray shadow from Maybelline Pink Persuasion Eye Studio Color Plush palette was applied around the top and bottom of eyes. Eyes were finished with black liner around the entire eye, and multiple coats of Maybelline Great Lash Mascara. Finally, cheeks were enhanced with Maybelline Blush Deep Rose in Pink, with lips finished using Color Sensational Popstick Lip Color Gloss in Pink.

I’d love to try this smokey cat eye out for myself!

I can’t help but feel deja-vu to past l.a.m.b seasons…

Unfortunately, I was more impressed by the backstage beauty than the actual clothes for Spring. As a fan from the very first season, I have to say this collection left me wanting. It was nothing new, from a brand made famous by its ability to transform a wide variety of influences into a unique creative collection.

This sweater was my favorite piece in the collection.

The saving graces of the collection would definitely be the patterns–Gwen is never afraid to take risks mixing prints and patterns. I found this season’s shoes, and the jewelry, by NOIR to be the standouts by far.

These shoes are a breathtaking electric navy blue in person.

The pieced together look of the woven handbags was fun, but didn’t quite grab my attention like the older seasons of l.a.m.b bags have in the past.

Sadly, l.a.m.b seems to have lost many of the little touches (like Gwen’s lyrics incorporated into the clothing) that initially set it apart from other brands, and the sea of much less inspired celebrity clothing lines.

Here’s hoping Gwen Stefani is back to her usual inspiring level of creativity that brand devotees are accustomed to by Fall 2012.

For the second season in a row, I was lucky enough to be invited backstage to cover the pre-show prep of one of my favorite brands, L.A.M.B. I’ve been following the brand since it’s inception, and as a huge Gwen fan for over 15 years, I couldn’t have been more excited. Thanks so much to Dashing Diva, the beauty brand responsible for the show’s nail looks for having me! The atmosphere this season seemed to be a bit more rushed and hectic than the Spring show (more on that below), but once I arrived, I managed to snag a few minutes with Dashing Diva’s nail technician Pattie Yankee, and talk about Gwen’s inspiration for the Fall look.

Because of the incredible variety of colors used in this season’s collection (divided into multiple “groups” of overall looks), Gwen decided that a classic black was the only color that would work with every look.

Dashing Diva’s “Limo Service” was used on the models, and on Gwen herself! (Two coats were applied, followed with Top Seal.) Black nails made an appearance at quite a few fall runway shows, with Gwen admitting that while for awhile, the color was out, it was clearly making a comeback.

Limo Service, as seen on Gwen. Instructing the Models After Their Run Through.

With time to kill after getting some more beauty shots, I managed to capture a bit more of the pre-show backstage atmosphere. When I’d first arrived, Gwen was nowhere to be found. Turns out she was watching the models practice in the Theatre.

In addition to the beautiful black nails, the hair and makeup was also phenomenal.

Hair was once again styled by Danilo. With Makeup by Charlotte Willer for Maybelline.

The variety of different looks seen on the models made l.a.m.b one of the most eclectic shows of fashion week!

The Buffalo Girls, What Ended Up Being My Favorite “Group” From the Show.

The Shoes, as always, were a mix of Gwen’s punky aesthetic, and glam:

One of the reasons for the “hectic” atmosphere I mentioned earlier— the models ran through the show three times before it began. Causing hair and makeup to run slightly late, and Gwen’s publicity interviews to back up.

Also there watching Gwen talk to the press, her super sweet parents! You could tell by the looks on their faces they had to be some of the proudest parents of all time. Gwen’s mom Patty was looking totally adorable in an older season l.a.m.b zebra print coat, which I complimented her on.

Gwen Noticing Her Family Watching Her.

With 8pm quickly approaching, quite a few other photographers mumbled frustrations about no posed “photo op” being set up with Gwen, a great contrast with last season’s show. I took it in stride, and with patience, still managed to catch Gwen’s eye before I headed out to grab a spot for the runway show. And all my waiting definitely paid off:

Seriously the Most Gorgeous Woman in the Business!

Be sure to check back soon for the full runway report! See the entire set of backstage photos here.

Arriving backstage at L.A.M.B, I was immediately thrust right into the middle of a fashion frenzy. Models had colorful extensions braided into their hair, manicurists roamed the floor painting nails, and tailors worked speedily on touching up a last minute dress.

The season’s “African Dance Hall” inspired theme was complimented by every last detail of the models look.

Beautiful dark navy nails brought out the blues in much of the clothing.

Nails by Angie Wingle for CND.

Nails were painted in a custom-mixed shade of dark blue. Colors used were CND’s Inkwell, Studio White, Speedy, and Anchor.

A similar color is set to launch as part of CND’s Fall 2011 collection.

Hair was styled in elaborate masses of long braids, inspired by Stefani’s recent red carpet looks, and multi-ethnic traditional hair styles. Lead stylist Danilo, for L’Oréal Professionnel used clip in braids in contrasting colors to create the look. Density Spray was used to mold the extensions, which were pulled back into an asymmetrical pony tail.

A work of art.

Makeup by Charlotte Willer for Maybelline

Face: Dream Liquid Mousse.
Eyes: Eye Shadow Quad in Give Me Gold. Gold shadow was applied to the crease. (Also used to highlight inner corners, brow bones, and tops of cheekbones.) Copper shadow was used on the crease, extending out into a cat’s eye shape. Yellow shadow was swept over the entire lid. Followed by black liner under lower lashes, also creating a cat’s eye. The look was finished with multiple coats of Falsies mascara.
Lips: Tempting Toffee Lipgloss #55 for a pink look. And Deep Red Lipstick #645 for a more dramatic lip.

As models were prepped, Gwen gave interviews and discussed her inspiration for this season’s collection.

Members of No Doubt were backstage too, showing their support for band mate Gwen:

Gwen taking one last look at the collection before the show.

See photos from the runway here.

After the show Gwen was joined in celebration by her band mates, family, and Debbie Harry backstage:

Gwen and her co-designer.