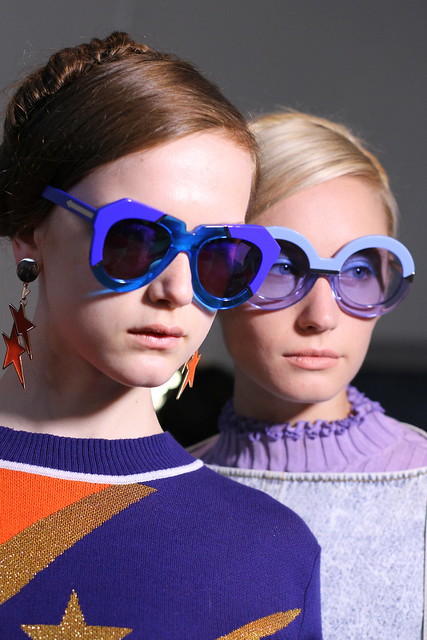 Karen Walker impresses me season after season with her fun, quirky take on clothes that are– gasp!– actually wearable. While I love avant garde fashion, or flowing gorgeous ballgowns as much as the next girl, it’s nice to see impeccably designed clothing that is suitable for everyday wear, and affordable. 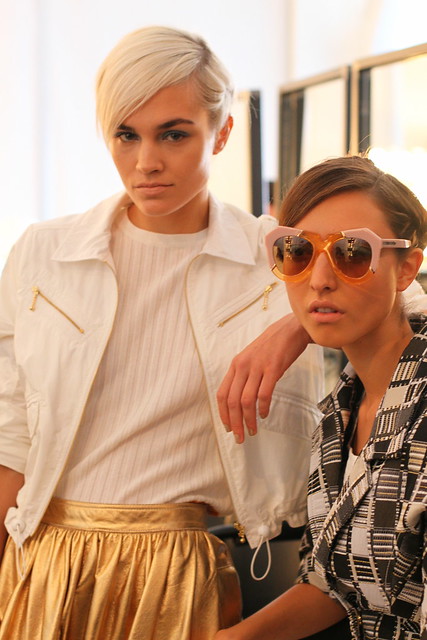 The fact that designs some of the best sunglasses around also helps.

And like many of my other favorite designers, Karen has fun with her collections’ themes and inspiration. For Spring, that inspiration was “life in Zvedzny Gorodok, AKA Star City” in the Soviet Union. Once a secret city where Soviet astronauts lived, little details such as spate suite-esque zippers, utilitarian garments, and star shaped earrings helped visualize that inspiration. 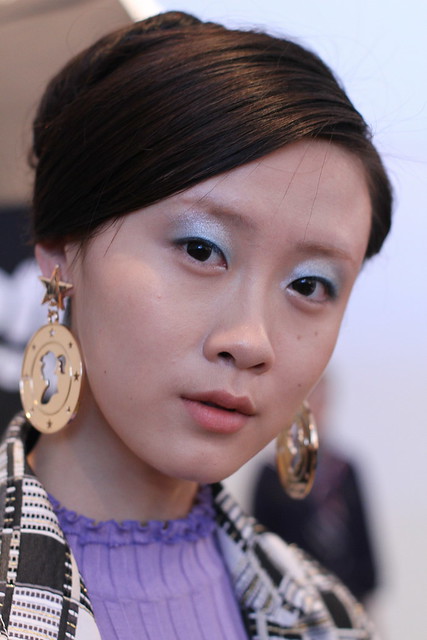 END_OF_DOCUMENT_TOKEN_TO_BE_REPLACED

Karen Walker’s show is always one of the most fun and upbeat shows of every NY Fashion Week. Backstage, the atmosphere is no different: models are happy, smiling, and enjoying themselves, posing in the gorgeous clothes, and absolutely amazing sunglasses Karen comes up with, season after season.

Sadly, this season I overbooked myself (a lot!), and Monday, the day of Karen’s show, I ended up in a bit of a time crunch. But I still managed to spend some time backstage, photographing the equally fun makeup, and tousled, beachy hair.

END_OF_DOCUMENT_TOKEN_TO_BE_REPLACED

Karen Walker’s Spring 2013 collection was inspired by space. Yet the somewhat futuristic inspiration was toned down with a dash of 1950’s nostalgia, and whimsical sherbert hues.

To get the look: Hair was saturated with Bumble and Bumble Surf Spray, then dried. Three loose braids were woven into hair.

The braids were then flat ironed, then undone to create a slight wave. Extensions were glued in, then trimmed to create the shaggy bang fringe.

Clinique Global Colour Artist Jenna Menard took the 1950’s optimism, and space age theme of the show and translated it into a “moon kissed” makeup look. Lips were bright with a dash of iridescence, and skin was porcelain.

To get the look:
Skin was perfected with Clinique Even Better Broad Spectrum SPF15 Foundation, and set with Sheer Stay Matte powder. Long Last Lipstick in Watermelon was applied in multiple layers along with Colour Surge Eye Shadow Duo in Seashell Pink/Fawn Satin and Pink Slate to achieve the bright pink pout. Quickliner For Eyes Intense, in Intense Ebony was used to line eyes. The look was finished with High Impact Extreme Waterproof Mascara in Black, and Bottomlash Mascara in Black.

One of my very favorite shows each nyfw is The Blonds. Even shooting dozens of shows a season, one rarely gets a change to see such truly amazing pieces of wearable art on the runway, and such a magnificent spectacle at a fashion show.

As highly glamorous as the clothes may be, the entire production — hair, nails, and makeup, at a Blonds show is mind-blowingly haute.

Each model wore a motorcycle helmet with long, thick, horse tail-esque ponies attached to the back.
To get the look, the synthetic hair was steamed using a garment steamer.

Hair was then sharply chopped, to create a blunt ponytail. (Under the helmets, only Bumble and Bumble gel was used to wrap the models’ hair close to their heads.)

CND’s Kristina Estabrooks, who creates hands down the most intense nail art I’ve ever seen time and time again for The Blonds, designed the nails used for this season’s show. Materials used included leather and glass!

CND Super Shiny was used to seal the edges of nails.

Each outfit inspired a different set of nail tips.

The full product list, and instructions to get the look can be found here.

Lil Kim made a surprise appearance right before the show began:

Backstage at Jen Kao’s FW ’12 show, Laurent Philippon for Bumble and Bumble created a unique, dip-dyed hair style that left me wanting to get more experimental with my own hair.

Described as an “updated/softer goth look”, the style was edgy, while remaining pretty.

To get the look:
Hair was parted with a severe middle part. Bumble and Bumble Prep was sprayed on hair, then blown dry. Thickening Hairspray was then used to add volume and texture to hair. Dip-dyed extensions were added to the underside of models’ heads.

The look was finished with a spritz of Bumble and Bumble Shine Spray.

The dip dyed extensions, which were dyed right before the show.

To get the look:
Nails were painted with CND Oil Slick. Followed by two coat’s of CND Super Shiny.

Although I usually find myself drawn more to her Spring collections, Kao’s interesting mix of both Asian and western influences, and fearless experimentation makes her collections continual favorites of mine nearly every season.

7 drops of Blackack were added to the bright yellow shade Bicycle, which was painted onto models’ nails in 2 coats. 1 coat of AirDry Top Coat was applied to finish the look.

A closer view of the finished look:

Careful to note that this style can be dangerous if it veers into “wedding-ish” territory, the look was slightly disheveled, and meant to be a style that could easily be a “cool girl DIY”. The result was one of my favorite hairstyles of the season!

To get the look:
Hair was sprayed with Bumble and Bumble Thickening Spray (a favorite product of mine!) at the roots, then blow dried. Surf Spray was misted over the length of the hair to mattify. Hair was then rolled, and secured with bobby pins. Laurent then roughed up the hair using his hands, to create a disheveled look. Hair was finished with a spray of Bumble and Bumble Hair Powder, in corresponding shade to match the models’ hair.

Additionally, a handful of the models’ hair was styled with “do rags” made from Karen’s prints:

Prints are always the highlight of Karen Walker’s collections:

Many guests at the show wore dresses from Karen’s F/W ’11 collection:

Hair was “easy going and light”, inspired by a “90’s Kate Moss”. A thick, but loose bun was complimented by black feathers worn like headbands.

The look was created by lead stylist Laurent Philippon for Bumble and Bumble.

To achieve the look, start by applying Bumble and Bumble Prep to damp, towel-dried hair. Texture Gel (out this month) is used to thicken the hair, and add create a soft look. Make a low pony tail at the bottom of the neck, then twist hair up to create a loose chignon. Use six hair pins to secure the bun in place.

The makeup team, keyed by Lucia Pica for MAC, created a look that brought light to the models’ faces, and pulled colors from Yigal’s collection.

Faces were prepped with Face + Body Foundation. Sand Brown, and Bark eye shadows were used on cheeks to create a contoured shadow. Fling, or Lingering eye shadows were used to accentuate brows, finished with Brow Set. Sparkle Gold Gloss, and Golden Lemon Pigment were applied to the eyes using the artist’s fingers.

A circle of Orange shadow was applied to the corner of the eye using a small brush. The eyes were finished with a light coat of mascara, at the roots of the lashes. To complete the look, lips were coated in a light layer of concealer, and topped off with Peachstock Lipstick.

Along with the models and prep teams, actresses Vanessa Hudgens and Paz de la Huerta were also backstage.

Yigal made sure each of the models looked perfect:

Final touch ups were made, and then the show began!