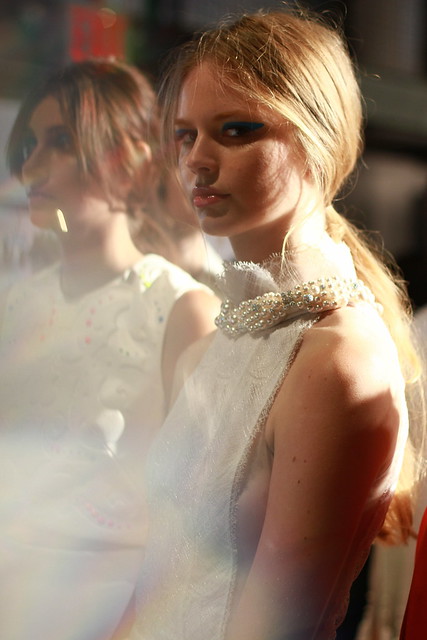 HONOR is one of those special NYC based brands that I’ve been following almost since their inception. Back in 2011, I shot their second show ever, and fell in love with their unique mix of whimsy, and retro sensibility. 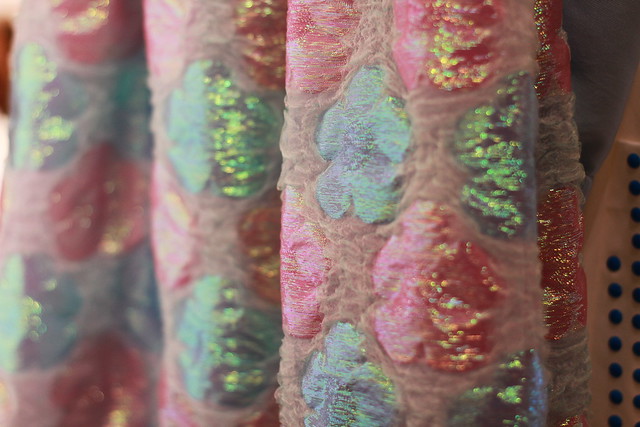 Such a fun fabric!

Each season, they create and incredibly detailed inspiration story behind the collection. For Spring, the story was as follows:

“A beautiful debutante falls in love with a George Harrison-type bad boy. They go on a physical and spiritual “trip” together. She finally realizes she has fallen for a bad person and begins to untangle herself from him. She is stronger for her experience.”

For the beauty look, this translated into a relaxed low ponytail, bold blue winged eyeshadow, and a fun blue and pearl nail. 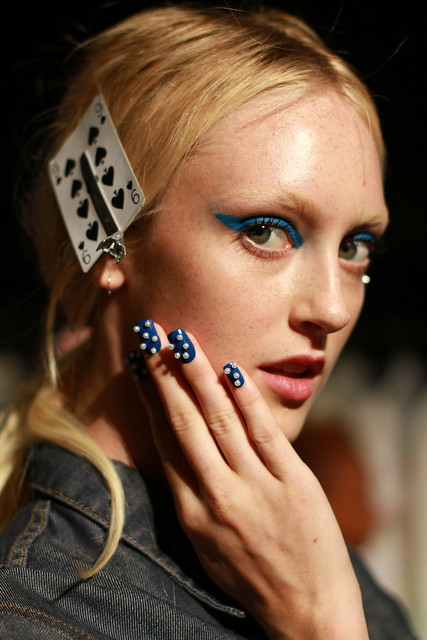 END_OF_DOCUMENT_TOKEN_TO_BE_REPLACED

In case anyone may have missed the 400 other times I’ve gushed over it on this blog, I LOVE SHEER. Sheer fabrics have to be my hands-down favorite element of fashion. Whether it’s black, gothy lace, or romantic tulle, I want to wear it. So as you can imagine, seeing Christian Siriano’s Spring 2013 collection was like dying, and going to Sheer Heaven.

But before we get the ballerina inspired clothing, let’s talk about the backstage beauty. Taking the concept of a ballerina “leaving practice”, the beauty looks were not those of a ballerina onstage, but mimicked the light, sweet, and slightly unkempt appearance of a ballerina’s everyday life.

To get the look:
Antoinette explained that the secret to this bun is in the twist! Hair was sprayed with “Pure Abundance Prep” to add thickness, then blown dry. Models turned their heads upside down, while stylists added a dab of Texturizing Cream to ends. Hair was then pulled to the crown, and a comb’s tail was used to rake the ridges out. The bun was created with a simple twist, which was then secured with an elastic band. Pins were added to finish the look, which was “slightly disheveled” and finished with “Air Control Hair Spray” right before the models went out on the runway.

MAC Lead Artist Polly Osmond led the team of makeup artists in developing the fresh-faced, pretty ballerina on the go makeup for the show.

To get the look:
Faces were prepped with Mineralize Moisture SPF 15 Foundation. Powder Blush in “Well Dressed” and “Tenderling” was applied to cheeks and the forehead, with a slight dab of Cream Colour Base in Luna overtop to add a highlight. “Runway Rose” was used on eyes, along with Cream Color Base in “Shell”, on the center of eyelids. A mix of concealer, and Cremesheen Lipstick in Creme Cup was used on lids. The look was topped off with Brown mascara on top and bottom lashes.

CND lead nail tech Angi Wingle painted nails in a romantic, sparkly pink to match the metallic and pearl colors in the collection.

To get the look: 2 coats of CND “Grapefruit Sparkle” (out in May 2013) were used, followed by High Shine Top Coat.

And now for some of the most gorgeous dresses (and shoes!) I have ever seen:

Some of my favorite looks from the collection:

I can’t even take how beautiful these three dresses are:

Who says wedding dresses have to be white?!

Get in my closet.

Backstage at Jen Kao’s FW ’12 show, Laurent Philippon for Bumble and Bumble created a unique, dip-dyed hair style that left me wanting to get more experimental with my own hair.

Described as an “updated/softer goth look”, the style was edgy, while remaining pretty.

To get the look:
Hair was parted with a severe middle part. Bumble and Bumble Prep was sprayed on hair, then blown dry. Thickening Hairspray was then used to add volume and texture to hair. Dip-dyed extensions were added to the underside of models’ heads.

The look was finished with a spritz of Bumble and Bumble Shine Spray.

The dip dyed extensions, which were dyed right before the show.

To get the look:
Nails were painted with CND Oil Slick. Followed by two coat’s of CND Super Shiny.

Although I usually find myself drawn more to her Spring collections, Kao’s interesting mix of both Asian and western influences, and fearless experimentation makes her collections continual favorites of mine nearly every season.

Christian Siriano’s inspiration for his f/w 2012 collection came from the 1930’s film Vampire Bat. Which resulted in one of the most literal translations of a designers influence, into a corresponding backstage beauty look– that I found to be very beautiful, and quite unique.

The bat motif appeared not only in the clothing, but hair and makeup as well.

AVEDA’s Global Creative Director Antoinette Beenders created a hair style that mimicked the shape of a bat, keeping hair sleek and close to the head up top, while spreading out in the back to mimic wings.

To get the look:
STYLING STEP-BY-STEP:
1. Prep hair with Aveda Smooth Infusion Style-Prep Smoother and blowdry straight.
2. Create a section at the top of the head by parting hair along the parietal ridge on both sides. Secure hair on top of head with an elastic.
3. Continue the parts on both sides of the head toward the nape. Secure center section at the back of the head with an elastic.
4. Comb out the loose section on the left side of the head and prep with Aveda Air Control Hair Spray. Create an inverted braid, starting at the temple – 1 to 2 inches above the ear – working toward the nape, following the natural curve of the hairline.

5. Secure the braid at the nape with an elastic and flat iron loose ends.
6. Repeat on the right side of the head. Mist both braids with Aveda Control Force Firm Hold Hair Spray.
7. Release the section at the back of the head and comb out.
8. Flat iron hair in one-inch sections, prepping with Aveda Air Control Hair Spray to add gloss and light hold, moving up the from nape to crown.

9. Remove the elastic from the top section and use a flat iron to smooth the hair, working in horizontal sections from sides to center part. Let the hair fall over the braids, covering them completely, and smooth out with a fine-toothed comb.
10. Pull the hair back, as if for a low pony tail, in a wide, flat swath. Use pins to hold hair in place, anchoring them into the braids on left and right sides of the swath.
11. Secure hair by placing a 3 to 4 inch metal comb horizontally at the nape. Remove pins.

To get the look:
Faces were kept natural, using only MAC Powder Blush in Melba on cheekbones, and a light dab of eye gloss on eyelids. Lips were lined with MAC Lip Pencil in Nightmoth, then filled with MAC Lipstick in Media. Clear Lip Glass was added “at the last minute”.

To get the look:
1. Dampen hair at the root with Aveda Volumizing Tonic and blow dry with a large round brush to create natural volume. For added lift, use Aveda Control Force Firm Hold Hair Spray as a setting lotion while blow-drying by lightly misting the hair.

2. Use a one-and-a-half-inch barrel curling iron to curl one-inch sections of hair away from the face until all hair is curled. Rake with fingers to loosen.

3. Flip hair upside down and gently brush curls through using a Mason Pearson hair brush.
4. Flip hair back up. Create a deep side part and gently smooth out the top of hair using a comb, maintaining volume at the part.
5. Spray Aveda Brilliant Spray-On Shine onto a kabuki makeup brush and stroke the brush over hair from roots to ends to give a healthy shine. Keep style in place and protect against humidity with Aveda Control Force Firm Hold Hair Spray. — via Aveda’s Antoinette Beenders

The makeup for the show was the brainchild of Polly Osmond for MAC. Osmond was also influenced by the clothing’s under-sea theme, and choose bright colors, like one would find underwater. Eye makeup was applied using fingertips to give it a more free-flowing ocean-y look. Osmond dabbed 3 dots of color under the lower lash line, using MAC Eyeshadow in Three Ring Yellow. Lips were layered with a combination of MAC Lipstick in Innocence, Beware! and MAC Kissable Lipcolour in Woo Me.

The finished hair and makeup look:

As for the beautiful clothes? They should speak for themselves: